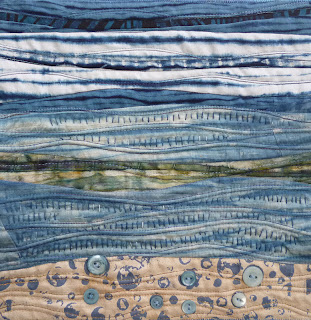 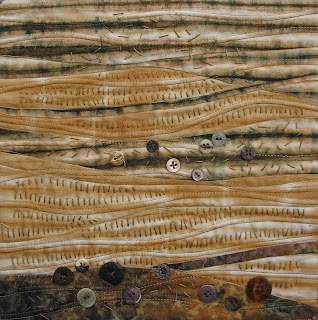 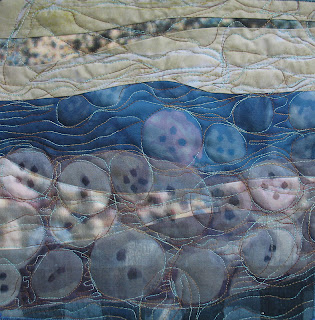 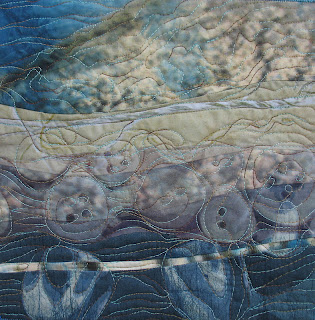 I've been making journal quilts for 9 years now so I was determined to finish  the last set for CQ challenge but  had to grit my teeth. I normally  use  journal quilts as testing grounds for larger pieces - with themes set this year that was rather more difficult and the earlier sets of 'circles' and 'text' were in the end stand alone with little  connection to my other work. I knew I would struggle with 'buttons' as  I couldn't help thinking of  Elizabeth Bartons' comments  on  embellishments - how so many people spend 3 minutes using their first idea, 3 months making it and then as it doesn't work, put beads on it!

As I've been going through a phase  of curved piecing African and indigo fabrics , I used some of the scraps left over in the first JQ adding some mother of pearl buttons that also went in the indigo vat. I've been wanting to try curved piecing some other African kola and indigo fabrics  to suggest sand ripples so that was my second . I do feel that these pieces would work just as well or better without the buttons!
Then I remembered how I'd successfully conquered another embellishment  (pearls) earlier in the year and used a similar aproach for  the third and fourth examples. I scanned some mother of pearl buttons - some small ones and a few  very large ones that reflected light  and after a bit of manipulation in Photoshop , printed them on  indigo cotton, indigo silk and silk organza. I combined these with an altered photo of a shoreline and a fabric copy of one of my 'ghost' monoprints from city lit which used threads.
Much happier with these and in a  way they sum up  my creative year: seascapes  transparency, printing, indigo.
Much happier too with this years Journal Quilt Challenge which has just been announced - a return to A4 and the theme of 'shades of... ' starting with red which is what I'm working with at the moment anyway. Hurrah!!
Posted by magsramsay at 17:43

You've succeeded in keeping your 'mark' with this group of JQ's in away that I've seen few other people achieve with this (Hopefully not to be repeated!) challenge. Well done you.

As for the next challenge - what's not to like about red even if it has knocked my tentative idea for this year off it's perch!

These are beautiful pieces of work, Margaret. The technique of printing the fabric with the buttons works very well. I have not come across that before. Thanks for a great blog and I look forward to seeing more of your work.

Beautiful pieces. With or without buttons, they flow so gracefully.