It's been a while since I posted here but I have a good excuse: 2 weeks ago on 8th December  we moved to Faversham!! We were without internet connection  until 16th and the landline was only activated yesterday!
Selling up  and buying has been a prolonged and stressful process. We started preparing the house for sale in March with a  lot of stuff going into storage in  May , then painting, new carpets etc.  We   accepted offer in last week of July and had our offer accepted but there were a lot of delays along the way  with buyer having to reapply for mortgage and then in the final stages  problems with the top of the chain and their equity release. It was touch and go whether we'd make it before Xmas,  with less than a week between exchange and completion.
But we're here now ,enjoying turning this house into a home and preparing for  Christmas.  Xmas is in storage !!( at least all our decorations are) and there's been no time to send out cards - we'll be putting together our annual newsletter while Ian is off work  and sending out new address /New Year cards. 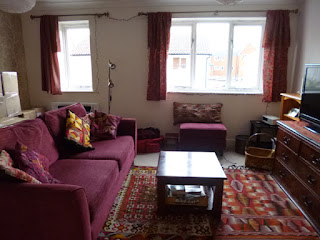 The kitchen is unpacked and fully functional. Our sofa and rugs look good in the sitting room  which has improvised curtains from an old duvet  and heaps of boxes of books in front of the 'feature wall'   (to be covered up by bookcases eventually ) 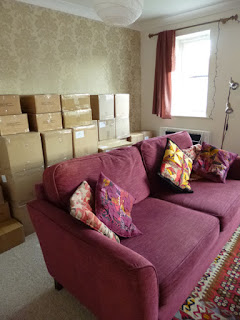 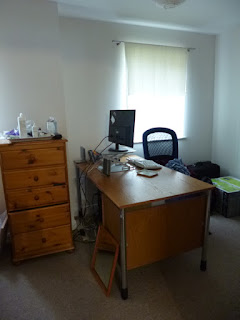 Ian has set up his computer in his office ( mine is in the dining room). My studio (below) is still more of a work in progress though  I found a good solution to raising height of old table  - 4 sand castle buckets! Plastic shelving will be arriving tomorrow. 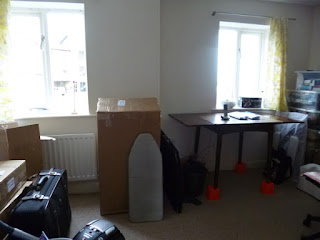 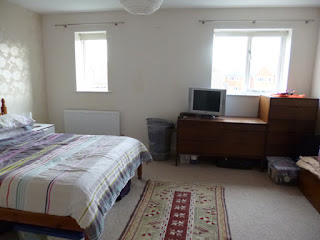 Our bedroom is huge! ( and has an en suite). Being on the second  floor it has a good view of our compact garden  and ever-changing skies. 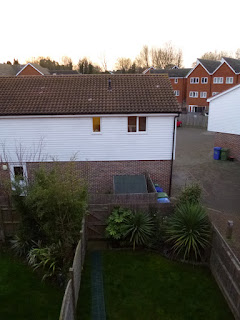 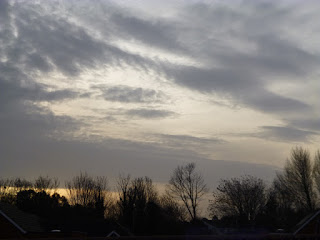 The move itself went pretty smoothly.  Our friends Sue and Peter kindly offered us accommodation at their house for  the few days before we moved so we were able to pack up everything ( including bed linen etc) and  have a nice meal and company at the end of the day rather than camping out.
﻿ 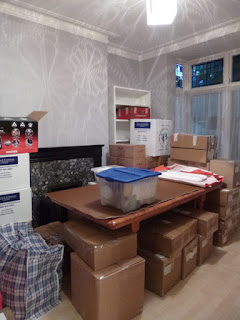 This is the dining room  the night before the removal company came and below is part of my stash all stacked ready to go. 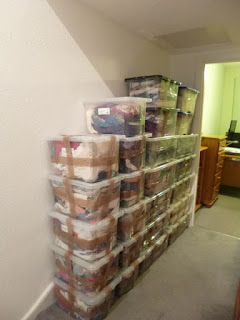 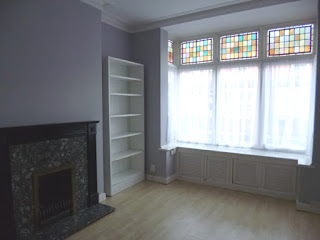 Because of all our preparation , the van was packed up the day before  completion so all we had to do on removal day was go  back to read the meters, take one last look around and head down to Faversham by train with hand luggage ( Sue and Peter came the following day with a car load of our stuff).  We had lunch in the  Sun Inn anxiously waiting to hear we'd  completed - as with everything else it went down to the wire, only got the keys at 1.30 . The removal men were already there unpacking so we never got the chance to see it completely empty. 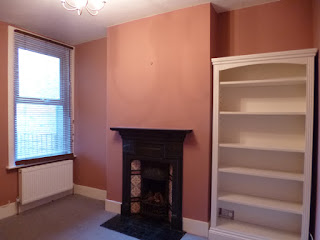 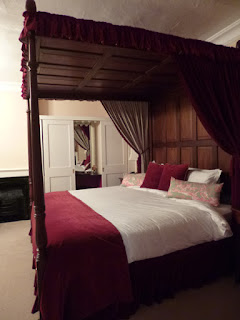 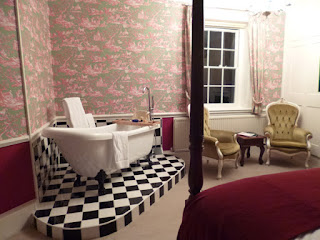 Rather than camping out in our new house we' d booked  3 nights  in 'Queen Matilda' in Faversham Creek hotel  which was very luxurious - I've  never slept in a 7ft four poster before!  Sue and Peter joined as at the hotel for 2nd and 3rd nights and we had a delicious Xmas meal in the 'Red Sails Restaurant  to celebrate.  They earnt it , unpacking the kitchen  boxes and taking them back to recycle.
There's been lots going on in Faversham in the run up to Christmas: markets , concerts , carols  ( look forward to joining the choir for Haydn's Creation in January). I've also  submitted a couple of pieces for the Open Exhibition at Creek Creative. Haven't yet made it to Macknades   but  I'm collecting a leg of lamb and choosing some cheeses tomorrow for Xmas from MB Farms on West  Street . Faversham is very foody place, I think we will be very happy here!  ﻿
Posted by magsramsay at 21:00 7 comments: