Drawing Tuesday: Back at The Beaney 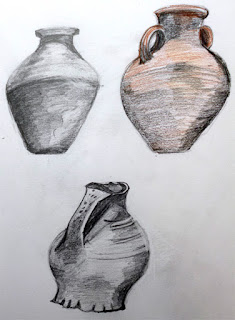 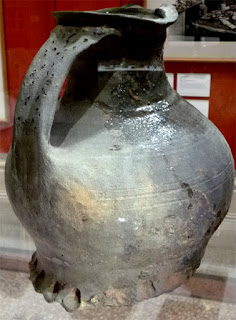 With an afternoon rheumatology appointment, I made the most of my bus ticket to Canterbury, revisiting the Beaney House of Art and Knowledge  in the morning. It's an excellent museum for sketching in , with well chosen ( and lit!) display,  good interpretation and lots of  chairs and tables , even pencils, laid out. I loved this medieval greyware pot (above) in the 'Materials and Masters' Gallery with it's thumbprints round the base and I've got these green pots in mind for my next visit! 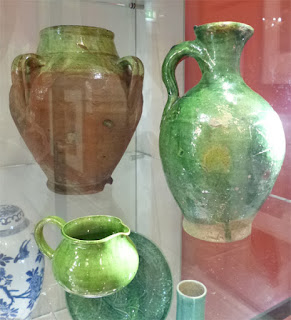 Instead of the Clangers, 'The Drawing Room' had a new exhibition  of artists books  titled ' Prescriptions'  with interesting, thought provoking and moving (sometimes disturbing ) interpretations  on the themes of well- being and medicine.  I recognized a few names from 'sketchbook project challenges' 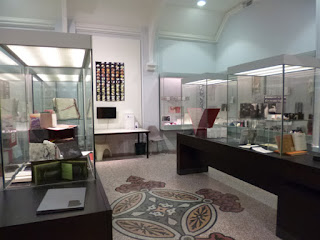 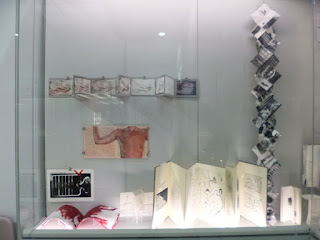 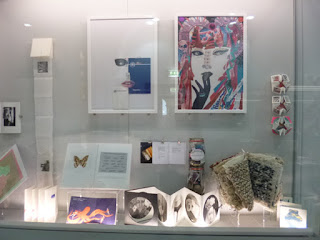 The low lighting for conservation purposes and the glass cases made photography a bit difficult  but these caught my eye. 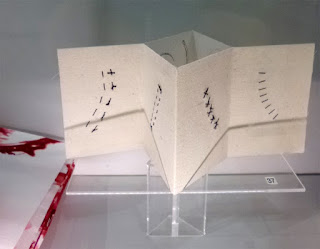 37.  ' Suturing' Margaret Cooter ( she blogged about it here) 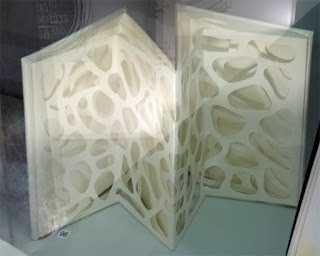 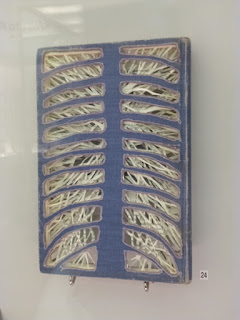 The exhibition is on until August ( the 'magic Lantern' exhibition  was also intriguing)
Posted by magsramsay at 19:03 2 comments: 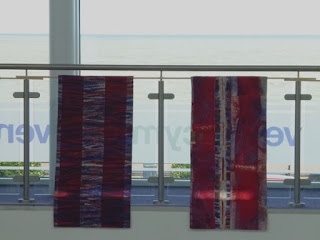 A week ago(!) I was in Llandudno  for the Quilters Guild of the British Isles AGM and conference.  A lovely venue and the Cwilt Cymru Connections quilts were beautifully displayed - I couldn't resist taking pictures of mine with the sea behind !  This was the final showing for these - they've recently been on tour with the Grosvenor Quilt shows. By coincidence, 7 other quilts of mine for 'International Threads'  were also on show - at Quilt Expo in Beaujolais.
It was a very good conference,  with interesting talks and workshops on offer   and most importantly lots of catching up with friends. 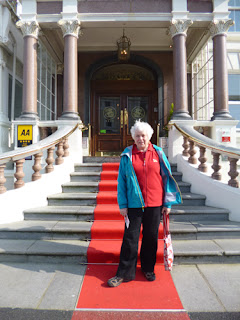 Sue and I were sharing a 'Premier Sea view'  room ' at the St George's Hotel  ( it was on a corner with view both ways) . There was a   very posh  dinner on in one of the function rooms the first night and we were entertained while having dinner in the terrace restaurant  watching the people arrive on the red carpet. 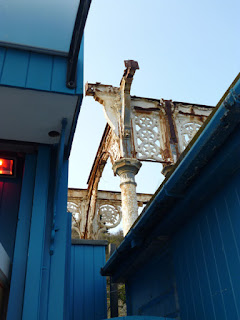 We walked along the pier, intrigued by an old metal structure behind the booths and kiosks.
A coach trip to Trefriw woollen mills was even more interesting than expected. Besides the fascinating tour of the processes involved, there was so much inspiration in the form of machinery and peeling corrugated iron. I took so many photos!! 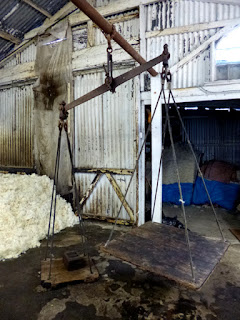 Mostly though I took lots of photos of the sea - I don't think I've stayed in a hotel so close to the sea since a Ramblers trip to Rovies on Evia  more than 20 years ago.  The windows  of the bedroom only opened a few inches ( probably to stop seagulls coming in - we  had a large one strutting on the windowsill outside) . So you have to imagine the contortions  we got into on Saturday morning after a storm overnight,  lining up our cameras  to avoid the rain drops on the window, while still in our nighties . Worth it for the spectacular sunrise though.
I also made a collection of sticks and stones  brought home in a basket from the African Fabric Shop.
Magie was kind enough to mention my 'Tunisian Door'  quilt in her moving talk and  of course I had to buy some more fabrics ( indigo from Guinea - the piece that's featured here) 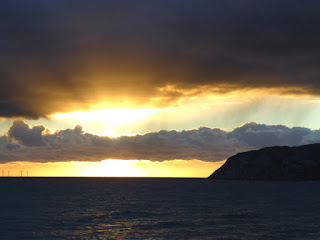 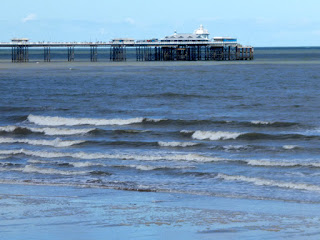 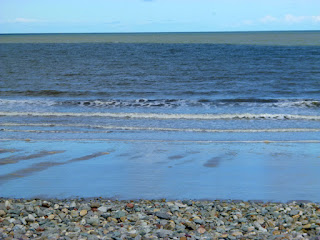 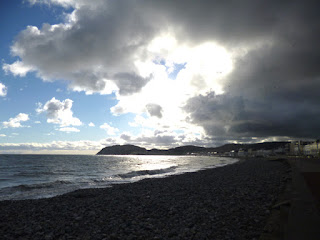 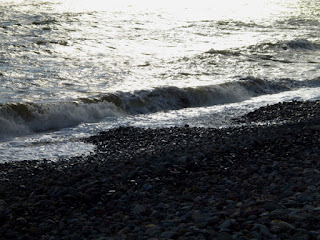 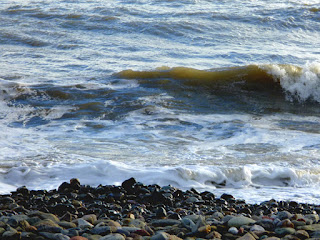 Definitely a place to come back to - straight forward journey by train   with the station within walking distance of front.
Posted by magsramsay at 11:54 No comments:

An inspiring day out 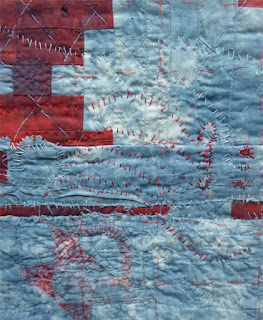 Yesterday I spent the day in  Vauxhall  at the  annual CQ meeting - lovely to catch up with so many friends  and the talk  by Ruth Issett  about her latest work , the way she's interpreting the landscape round her home in layered dyed organdies ,was so inspiring.   Afterwards , Sue, Robbie, Chrissie and I headed off in search of the Newport Street Gallery  (  noticing interesting scaffolding and llamas at the City Farm along the way!)  . Amazing space to  display paintings by John Hoyland  - while there were  a few interesting  pieces , I tend to agree with the reviews  that other artists have done it better.  It did however act as a reminder to look again at the work of Callum Innes whose  paintings I so enjoyed in Edinburgh 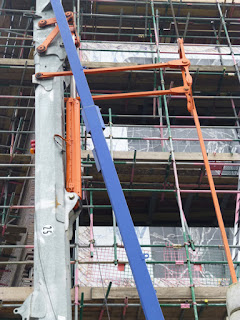 I've been sitting on the train a lot this week  with visits to the  British Museum (Tuesday drawing) and stewarding the Contemporary Quilt stand at ExCel  but have been using the time productively finishing my latest journal quilts. Other passengers are  interested but bemused as to why I'm  stitching on such very ragged  cloths ( I can hear them thinking ' but what's it for?') . There was a more enthusiastic response to the display of 2015 Journal Quilts at ExCel, great to see so many diverse ideas in the flesh rather than as photos on the Yahoo group  and a lot of people were inspired to   have a go themselves.
Posted by magsramsay at 15:52 No comments:

Solace in Stitching the Sky 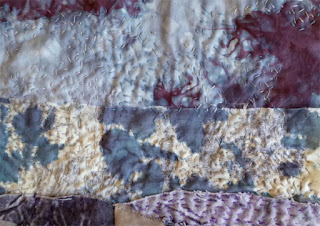 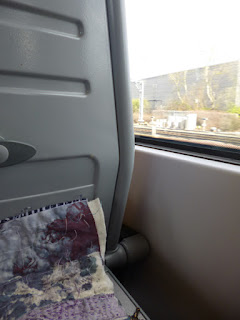 Journal Quilts are perfectly sized for stitching on trains , so when I travelled up yesterday  to Nuneaton and Rugby to visit their museums, I took  one I'd put together inspired by landscapes of Rydal Hall. 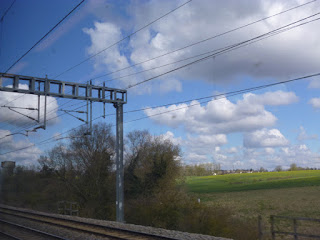 Stitching the sky, looking out of the window at the clouds racing by, gave time for reflection  and solace. Hearing  of the sad  death of Maggi Birchenough, how important  quilting was to her right to the end,  it seems to me we should not let opportunities pass by to do what we  love.  I stewarded the SAQA stand with her at FoQ  last year and we had some long conversations when it was quiet . Even though she knew then  the diagnosis wasn't good, she was still generous with her time  and enthusiasm.
It was also the anniversary of  my Dad's death in 1995 and I was remembering the train journey then - an evening phone call from the hospital in Warrington, catching the last train from Euston, sitting all night in a chair the nurses found for me, being with him as he gently slipped away. 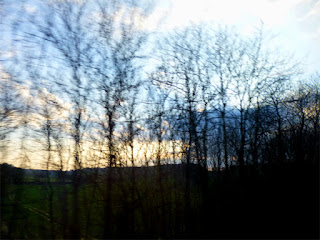 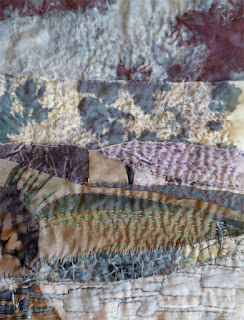