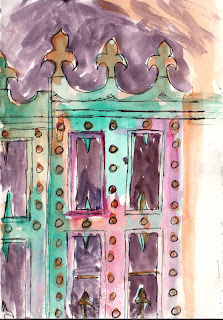 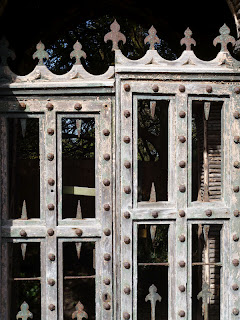 With such glorious weather this weekend, we decided to go to Box Hill ﻿for a walk - Ian wanted to revisit the 'Gallops' but  as the signage has been altered ( my excuse, nothing to do with my map reading!) we headed into Michelham instead. This wonderful old screen to the church door (relocated to  a rustic arch in the graveyard)   is even more weathered than when  I painted it in my sketchbook ten years ago. I was relieved to see it still there. 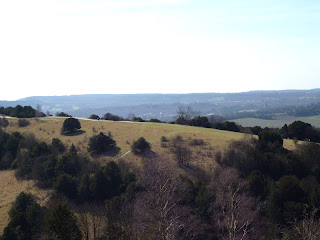 We had our picnic lunch in my favourite spot on the South facing meadow  with views of Burford Spur and the vineyards beyond - just look at the shadows under those trees!
I  christened a new sketchbook with a couple of bad watercolours using my 'mint' paintbox, trying to capture the purple haze around these birch trees. One of the charms of revisiting is that there's always something new to see in even familiar views 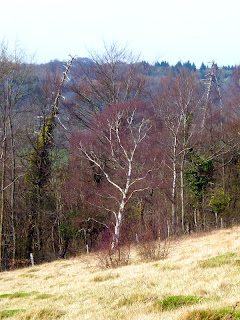 After a pint of 'Seafarers Ale'  at the 'Running Horses' pub opposite the church  in Michelham we walked a smart pace back to the station  along part of the 'Mole Gap Trail' crossing backwards and forward under and over the railway line, making good use of the kissing gates!   Back in London, we were ready for our £6.95 veggie curry  buffet at Ravi Shankar (especially masala dosas with coconut chutney ), bath and bed by 9pm! 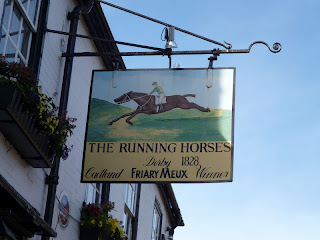 Posted by magsramsay at 11:41 No comments: 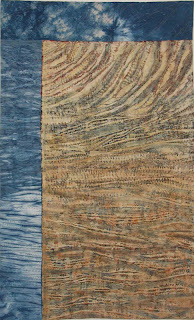 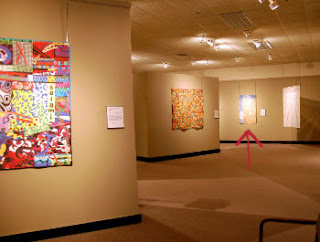 Huge Excitement - my quilt 'Strindberg Shore' in 'acCENT' exhibition at the National Quilt Museum, Paducah, by the look of it hung next to a quilt by Elizabeth Brimelow!!
Posted by magsramsay at 18:05 5 comments: 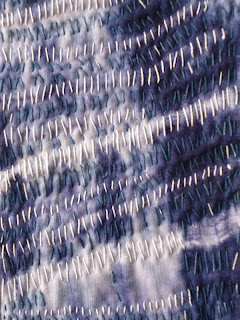 At the moment  I'm handstitching every evening while watching BBC4 - and wondering when  I'm enjoying the process  so much why it always takes a fast approaching deadline to get me going?!!
Posted by magsramsay at 09:03 4 comments: 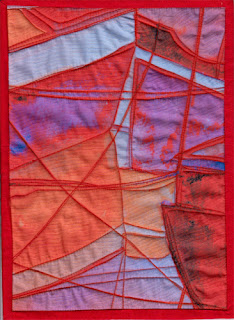 Finished quilting and binding my red series of boats for first 4 months of CQ Journal Quilt Challenge - Jan to April below,  bonus above.  Rather than being pieced , the 'bonus' is a digital print on fabric of a photoshop altered watercolour and as it is  a bit smaller than A4 proved a useful sample for Margaret's Narrow Binding technique. By the time I did the 5th I was  getting the hang of it - saves so much time to do the whole thing by machine. I'll stick to facing for larger pieces but rather like the red 'frame' and will do something similar when I move onto yellow boats and blue boats in the months ahead.
The bonus sample already  has a potential home- Ian pounced on it for his office when the last stitch had barely been put in. 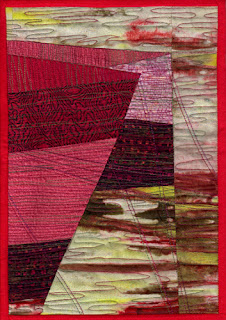 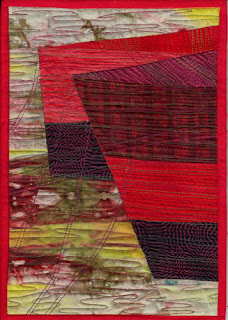 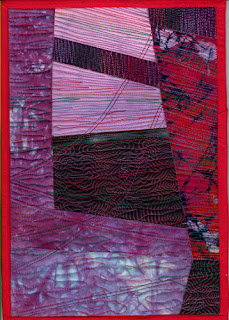 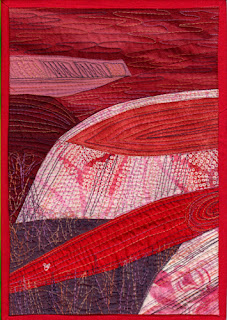 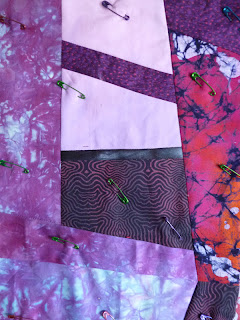 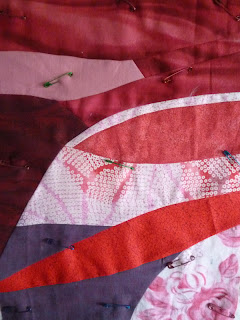 Ian was helping out at his parents this weekend clearing out their garage so made the most of some un-interupted creative time - sewing away and then  realising it was 2.30 and better have some lunch!
Two more red  boat journal boats constructed  (the top one with some gorgeous hand dyed fabric from Jo Lovelock - I'd rather buy than dye so will definately be using her services again) 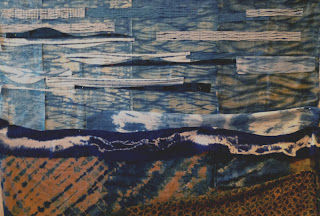 Much time was spent on  taking all the elements of this indigo sea piece and rearranging them ( and having to do some emergency surgery on my polystyrene design 'wall'  with liberal applications of duck tape.)  Still some way to go, trying to work out the best use of particular marks. I definately need to replenish my indigo stash. ﻿ 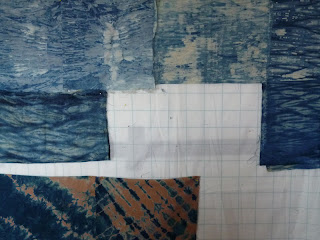 After some insightful comments on my work from Sue this morning we went off to Landmark Contemporary Textile Fair ( excellent carrot cake!) and I bought another couple of pieces by Gill Banks in her 'watermarks' series.  They're made of antique French linens and backed with felt rather than canvas or foam board, so much nicer than being behind glass.
I love buying other artists work! Thanks Ian for by birthday money in advance. 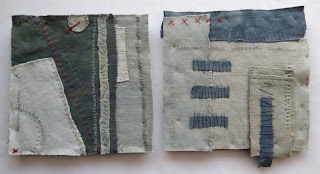 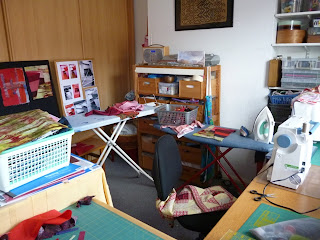 After spending Saturday giving the bay tree in the garden its' first haircut  in 3 years using 4 different pruning tools, I spent Sunday cutting on a different scale - bits of fabric with scissors and rotary cutter. 5 hours, 2 ironing boards , 2 sewing machines and a scene of devastation for 2 A4 constructions! 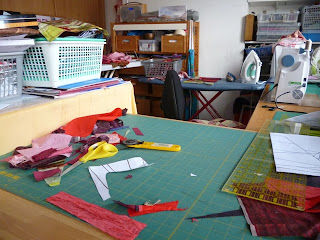 For the last weeks I've been at 'Quilt University' on Elizabeth Barton's 'Working in Series' class. It's actually the second time I've done it but there's so much information it takes a while to sink in. Last time I got as far as making some sketches based on houseboats and barges along  the Thames, an ongoing theme for the last couple of  years on 'boat friday' expeditions! I was determined to get a bit further in class to take advantage of Elizabeths excellent feedback  so with CQ Journal Quilts in mind (Shades of Red, A4) did some work on images in Photoshop  using 'channel mixer' and sorted through my red stash attempting to grade by tone.
Found a decent selection of 20 ( with back up of another 40 or so more roughly sorted). Quite sobering to realise how few light tones I have - I'm not really a pastel person but they have their place! 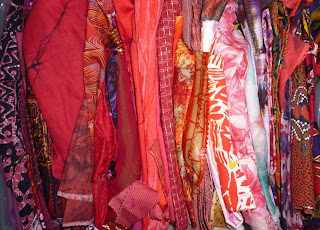 I cut out some rough patterns in paper but mostly cut and pieced as I went along - 3 attempts at inset seams before giving in and cutting into smaller  sections. I might plan the construction next time.... 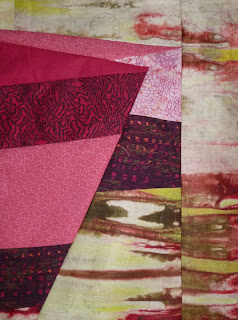 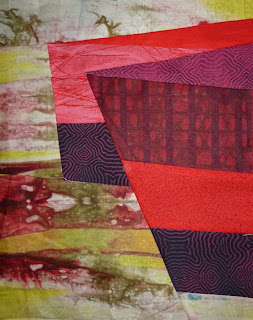 Posted by magsramsay at 11:58 No comments: