Just  been pinning and hemming fabric to make  a large tablecloth and 6 matching napkins for dining room  table once extended. It's material I've had for a while - bought for quilt backing but a bit on the heavy side for this purpose. Perfect for table linen tho' and although the print is of over-sized apples, the grey will look good with the walls and the honesty quilt which (eventually) will be hung in that room.  A quick job I thought as it's simple stitching but it's taken 2 1/2 hours. Then I calculated I'd pinned and stitched  792 inches - 22 yards ( some things I'm still not metrified for). 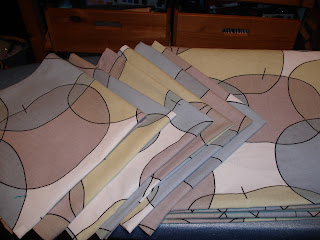 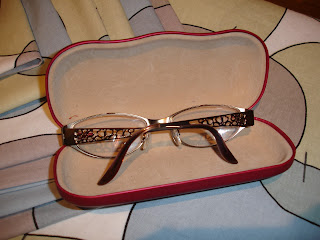 Although I wear varifocals most of time, separate reading glasses are useful for long stretches at the sewing machine as they give a larger area  in focus and don't have to keep tilting my head! I've just got a new pair despite only 18 months since last test as went to the optitions  with concerns over seeing flashes of light. I had a thorough examination including drops to dilate the pupils  and not having history of migraines,the light  flashes are most likely due to  retina receiving  non-visual (mechanical) stimulation, which can happen when it is being tugged due to  shrinkage of the vitreous humour. This is apparently  quite common with age ( and short sight) - according to NHS leaflet  in approximately half of all people, the vitreous humour has separated from the retina by the time they are 50. This doesn't usually cause any problems, and most people aren't even aware that it has happened. If it becomes persistent or I become aware of a shadow across vision that's the time to go to Moorfields A&E  as it might mean a tear in the retina but otherwise just have to put up with it.

As well as reading glasses I also got a new pair of varifocals - only they look just the same as my old ones as after a hour humming and haaing over frames , (not helped by peering into mirrors with dilated pupils )  found they still stocked the  originals. Decided against getting a different frame just for the sake of it  as they suit me . Made the measuring up and adjustment very easy too!
Posted by magsramsay at 18:00 4 comments: 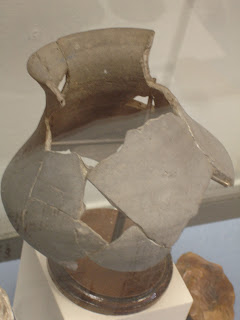 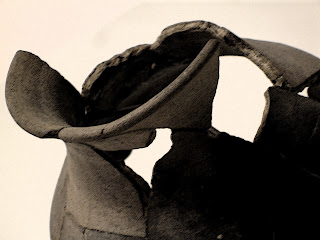 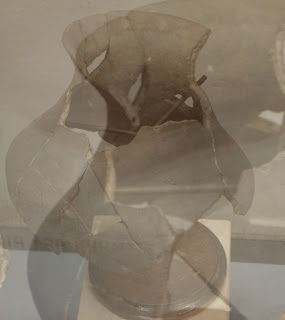 Besides having a go at making books , the TVCQ meeting on Saturday was also useful in putting flesh on ideas for exhibition in Slough Museum  next year. I'd decided to work with the 'Taplow Vase' as inspiration and had got as far as playing around in Photoshop combining different viewpoints. I'm thinking of doing something large transparent 2d using organza and pojagi techniques but was struggling to work out how to stabilise the edges so it wouldn't be too floppy. People were very helpful suggesting wire etc. Then Vicki  introduced me to 'crin' and very generously gave a piece to play with. 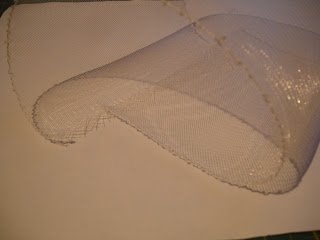 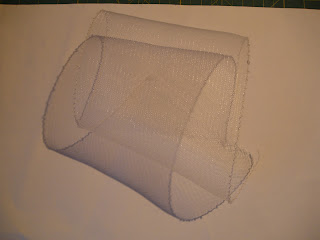 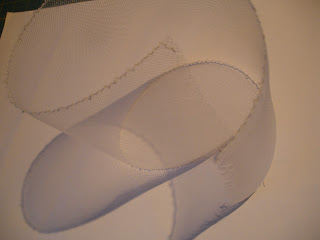 It has amazing properties both flexible and  structural at the same time having a mesh of nylon fibres a bit like a trellis!  Never having heard about it before I found some little gems of information about it.
'Crin' is short for 'Crinoline' and  the name was invented by the fabric's manufacturers, who combined the  words crinis (meaning hair ) and linum (meaning flax) or alternatively from  the combination of the French  words crin (specifically meaning horse-hair) and lin (again, meaning flax).
It's also called horsehair braid ( as that's what it used to be made from) and is  applied to the hemline of long frocks to add body without weight , supporting the shape of the hem. Also found a great tutorial on using it. Now just need to order some and start playing !

Posted by magsramsay at 09:00 No comments: 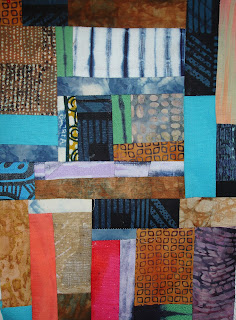 You  may well have noticed that there there hasn't been a great deal of output from here over the last few months!! But I haven't been skiving - I've been reflecting!!  While I was  up at Edinburgh on BGEN conference (demonstrating cauliflower cloning again!) I took the opportunity to take part in some of the workshops. I'm still not sure I understand the how 'Metasagas' work (at least  I can't see them in a lab situation) but the overview on learning/teaching styles was an eye-opener. 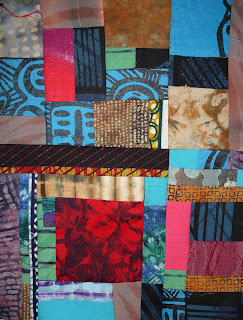 Also useful in reflective mode was putting together a talk 'Experiments with Layers' for London Quilters. They'd heard ' Sketchbook to Laptop' a few years ago so this was an update. Apart from them being a hugely welcoming and responsive group who asked interesting questions, it proved a way in to thinking about where I'm heading creatively.
After I finished honesty and door quilts, 2 major projects , I had a series of courses/ workshops- on paper lamination; watercolour painting; composition and indigo dyeing. All useful in their way and I'm still working through the implications and interconnections. One thing I realised  was sometimes it can takes years for particular subject matter or technique to surface and  take on relevance -eg  I've long been interested in crumbly doors and collected loads of reference material but only now is it beginning to gel when I have a suite of techniques and understanding. Likewise it can be old ideas that resurface and become relevant again.
I've been enjoying making more journal quilts again today, re-using scraps of scraps , not only of fabric but of long forgotten thoughts.
Posted by magsramsay at 22:42 No comments: 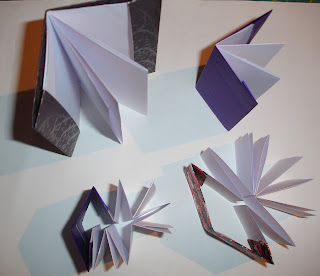 It's been a while since I've been to a meeting of Thames Valley Contemporary Quilt Group and I've really missed it. How it's grown over the last 2 years!An excellent session on making books with Margaret Cooter (who's doing an MA in Book Arts at Camberwell ) and a brainstorm on forthcoming exhibition at Slough Museum. In the morning we made folded  'secret' and 'flutter'  books 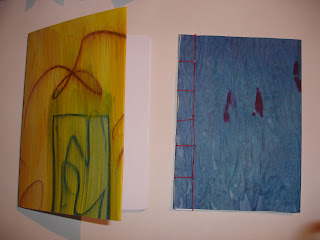 And in the afternoon we made examples of stitched pamphlet and stab -stitched books. 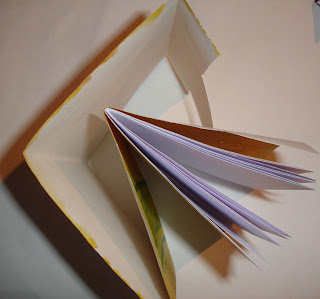 I was particularly taken with the wrapped pamphlet - the cover offering more structure and protection as well as hiding the stitching!!I've already had a go at the stitched pamphlet format to make  watercolour sketchbooks as I couldn't buy ones I liked. I either glued on a backing (wasting a couple of pages in the process) or stitched it into a leather cover as for my Tunisian Journal.Putting  a cover on in  the way we were shown opens up all kinds of possibilities. 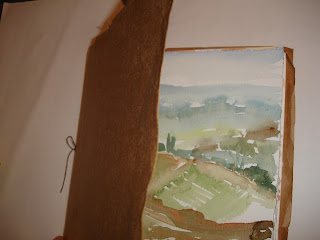 It also made me think about getting down to changing the paper in the Moleskine Cahier supplied for the Sketchbook Project. I did a trial run replacing the horrid thin paper with decent cartridge (actually the contents of the leather journal I'd re-filled  with watercolour paper! ) Worked pretty well apart from the rounded corners but I've got a punch for that now! My theme is 'Inside, Outside' and I made a rough start with consideration of vegetables!! 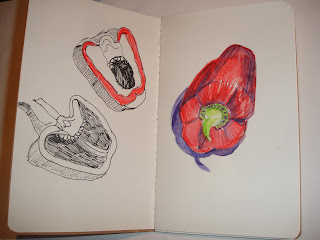 Posted by magsramsay at 21:59 No comments: 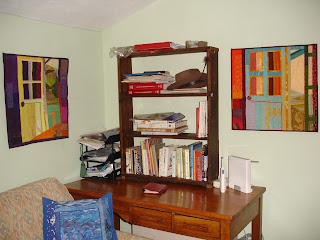 Thought I'd show you other quilts of mine in situ. Firstly Ian's office - he's bagged quite a few pieces for display,  As you can see I've had a thing about doors for many years. Bonnard'sWindow (right) and Bonnard's Window II  date back to 1998. Bonnards Window II featured on the literature for 'Festival of Quilts' at Lords Cricket Ground in 1999. Remember that? -I didn't get to go to that as I'd just had surgery.
The books are part of Ian's Amazon Marketplace business 'Snanupbooks'. In a rash moment I promised to make him a banner for hanging along the bookcase.... 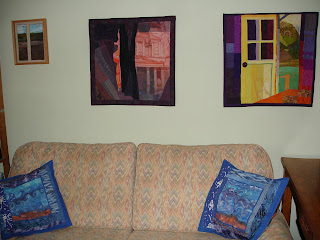 Bonnard's Window II and Petra ( made for Poetry in Stitches, it was on tour/in Kingston Hospital for a couple of years). The silk-painted cushions I made for Ian when we were courting! The framed piece is an early acrylics experiment that I don't much care for but Ian liked so I gave him. 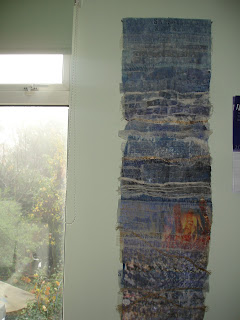 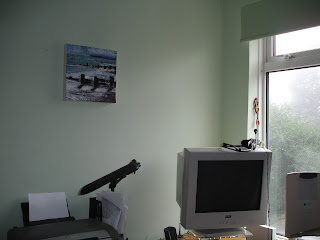 And finally Bexhill Breakwater Sample looks good mounted on 12" canvas. Still plenty of room on this wall!!
The lovespoon in the window came from Llangollen when I first went to QuiltFest
Posted by magsramsay at 09:21 No comments: 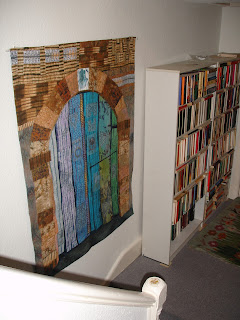 My Tunisian Door quilt has returned from display at Quilt Museum 'Under African Skies' and for the moment anyway is hanging outside the bathroom next to the travel (and double stacked fiction) books. It looks like you could go through it to next door! 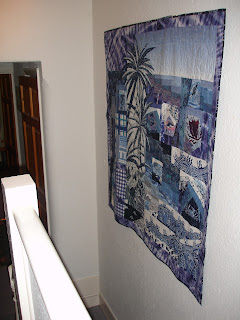 It looks comfortable opposite 'City Girls Dream of the Sea', a quilt from 11 years ago, also made in an improvisational style mainly from various charity shop indigo fabrics - the palm tree dressing gown was a particularly good find. It was hand quilted while recovering from surgery  and is probably the most personal in meaning of my quilts - I do dream of the sea!! 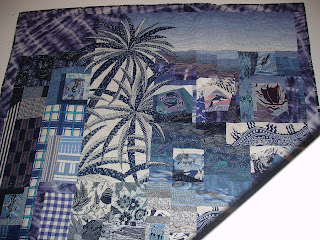 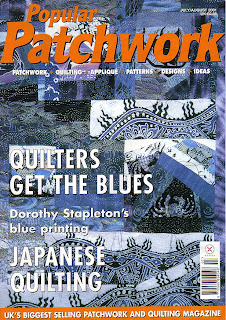 It even featured on the front cover of Popular Patchwork (after it won 3rd prize in competition at Harrogate that year) I really should get a decent photo of it ....
Posted by magsramsay at 16:03 3 comments: