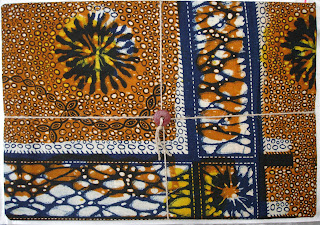 Look what was waiting for me when I got home from work yesterday! 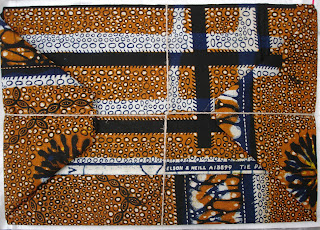 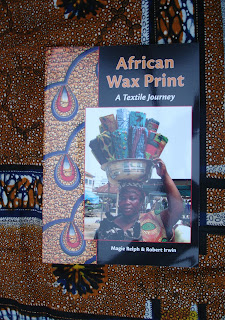 Looks like a fascinating read - some of the subject matter covered in Magie's talk at Regional Day but more so. 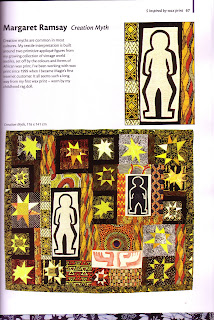 And in the gallery section, my 'Creation Myth' looks splendid - made an excellent job of photographing it.
Posted by magsramsay at 10:33 4 comments: 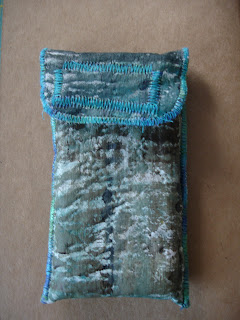 What with gardening, a visit from Ian's parents, and being busy at work, not much time (or inclination) for creativity. But the main excuse  has been the arrival of my new mobile phone! Rather different from the basic model I've had for 12 years  which was going strong until it developed a crack in the casing, this one not only has a camera and MP3 player but is a touchscreen. Only a basic entry level but I've been enjoying searching for 'apps'. After seeing what 'Purple Podded Peas' achieved with a paint app, I've been having a look at what is available from ovi . You can't save what you produce with 'magic brush' but it's fun. Next step  working out how to upload photos directly onto facebook or blog. 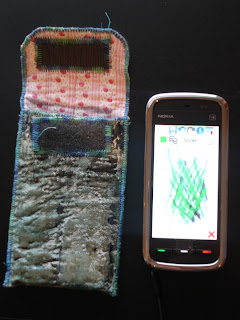 I did  get my sewing machine out long enough to make it a cover (from the offcuts from this door quilt - acrylic paints make a good water resistant fabric! ) 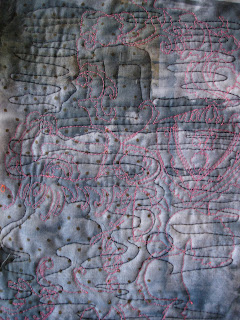 Sheila requested a look at my quilts this weekend. Happy to oblige, talking about the processes involved and the different projects on the boil got me inspired to do some more work on the 'childhood memories' challenge, sewing into sample from the back with fluorescent threads. Perhaps not suitable for all over but definitely worth pursuing. Must crack on, deadlines loom. 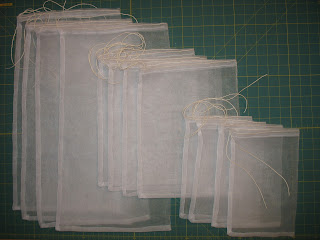 A few weeks ago I made several sizes of pollination bags for the nursery at work. At a meeting to discuss production of seeds from  rare plants in the collections for storage in the Millennium Seed Bank, staff were complaining about the difficulties with the pollination bags they currently use (to exclude pollen from other plants).In the tropical glasshouses, cockroaches eat through the paper!! Thinking of the polyester organza I'd used in the paper lamination class at Art Van Go, I offered to make some prototypes to try out.
I contacted Sarah Welsby to find where she got her polyester from and ordered a couple of metres from Bramble Patch. This alternative use obviously amused her as when Gunilla was on her course at FoQ, she mentioned it. I made them with French seams and a channel around the top with some robust string. 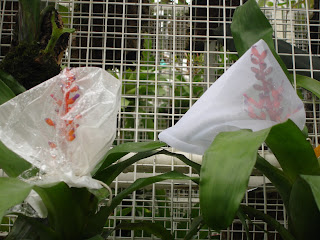 They were greeted with enthusiasm when I handed them over ( despite their similarity to wedding favour bags- now there's a thought!).  I had an email this week to say that Michele was currently trying a few out on the bromeliads so I  went to take some photos today. In one location she's done a direct comparison with their current paper bags ( above, polyester on right) They're looking good so far. If these prototypes work (they're also being tested out in the arboretum and at Wakehurst) then I'll have to source a lot more fabric (and calculate the cost of my time too ). Claire (at Committed To Cloth ) has also been helpful with wholesale sources although I'm not sure we'll need a whole roll. 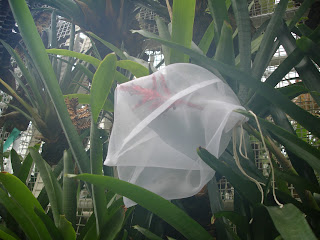 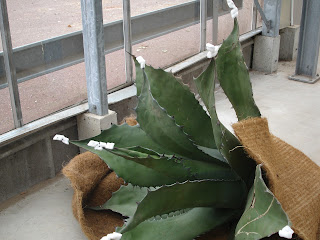 After an example of  my hobby helping work, here's an example of the opposite!
There's been various discussions floating around about the use of  'Pinmoors' when basting quilts. They seemed a great idea but rather expensive. I was considering ordering some foam earplugs to try but then I saw  how the vicious spikes on this Agave had been dealt with.  I'm sure down in the cellar I've saved some foam chips ....
Posted by magsramsay at 16:34 3 comments:

A very frustrating weekend waiting in for (non) delivery of new mobile phone ( first of all they said that it was awaiting payment and when they changed their story , it was still in the warehouse and they would personally chase it up on Monday (yeh right!) . Then yesterday having tripped once too many times on the lino in the conservatory decided to take everything out (including v heavy washing machine) and reposition it. Now it's worse - can't close the door properly!!!
To make it worse, I had great ideas about having a creative time after being inspired at the Knit and Stitch on Friday which came to zilch. Just as well Sue came round returning some books and computer stuff with some apples - at least I could be semi-creative and make a big dish of comforting apple crumble. 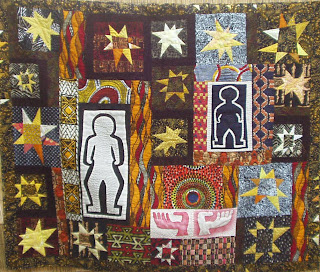 So to return to Knit and Stitch. One of the main reasons for going was to pick up 'Creation Myth'  from Magie ( it had been loaned for photographs to be included in forthcoming book on African Wax prints.)
It has lots of hand quilting - I was finishing it off on the hottest day ever recorded in the UK with a fan a couple of inches away and applications of ice to wrists every few minutes. I rather like the back too! 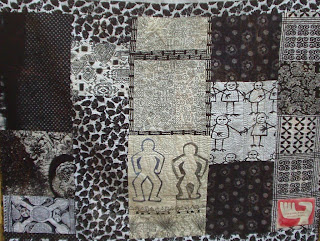 Some interesting exhibitions too - especially the 'Global Paper' and the glorious hand-dyed kelims from Turkey that 'Textile Techniques' had put together. I was rather taken with some of the works from group 'Hue' particularly the stitched curved paper of Elisabeth Rutt ('In case I forget' ' below) Reminded me to crack on with rebinding my Moleskine received as as part of the 'Sketchbook Project' I've had a go with putting better paper into another Moleskine journal and it worked pretty well apart from rounding the corners and I've a special punch for that now. I chose 'Inside, Outside' as my theme and had grandiose ideas of cutting doorways  and drawing interiors and exteriors to be viewed through these. Now,  I'm thinking about some of the exercises I did last year in my drawing class building up negative or positive shapes and inspired by tthis image, wondering about doing some of that in stitch. I love the use of variegated thread. 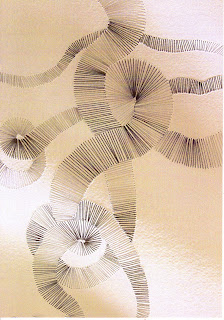 Part of my mission at Knit and Stitch was to test out some of the quilting machines - and I went prepared with samples including some stiff with gesso and acrylic paint to put them through their paces. I was initially disappointed as neither Husqvana or Pfaff had them on their stands (obviously more interested in flogging top of the range computerised models than a basic machine costing around £600) . However on the Juki stand , they were very happy to demonstrate the TL-98P and let me try it out on my paint encrusted pieces which it coped with admirably. I'm in love!! More expensive at £899 so it will mean trading in one of my Berninas - I'm currently looking around to see who supplies them more locally. 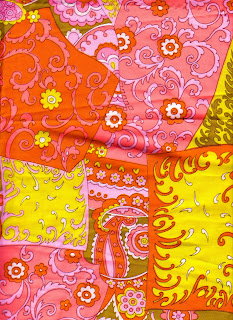 The deadline for SAQA 'Beyond Comfort' having passed with the ideas for it nowhere near gelled, it's time to return to CQ Suitcase Challenge 'Childhood Memories'. I think I'm still going to go with the black and white photo-merge idea but was pondering how I could introduce some colour. Then I remembered all those day-glo fabrics from the 60's/70's and wondered about stitching with fluorescent threads. While the sample above is a charity shop find (thanks Sue!) I did have a dress not so dissimilar. Maybe  I'll use it as backing and stitch round some of those patterns? I feel a test piece coming on
Posted by magsramsay at 18:42 1 comment: