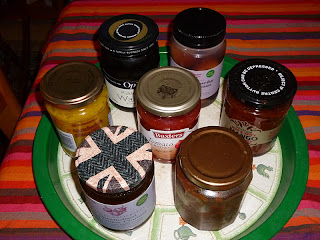 We've established our own traditions associated with Christmas Hibernation : a selection of pickles to have with the cold ham on Boxing day (perhaps 7 was a  bit excessive ....) These are eaten with jacket potatoes after a walk along the canal to the Fox in Hanwell for  a couple of pints of real ale ('Polar Express' and 'Roasted Nuts' ).Ian tries very hard not to say 'What about the weir?'  ( the piece I started 2 years ago but gave up on) but he can't resist. 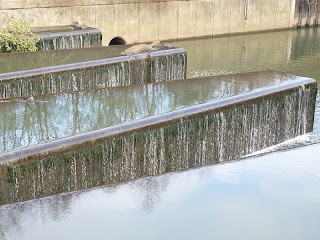 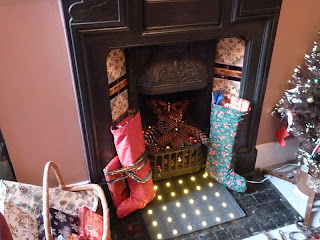 We put together stocking presents for each other - I always have to include a wind up toy, this year a speedy snail, and I always receive a couple of Baileys Miniatures. Books feature heavily in both as does Green and Blacks Chocolate.
These are opened while munching crumpets with brandy butter and bacon wrapped dates, washed down with bucks fizz and coffee. 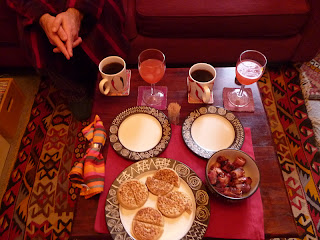 We're now into our creative days - Ian on the computer setting up his own blog and me painting in the mornings, sewing in the afternoon. 3 more days of this - bliss!!Then  a gradual acclimatization to the world outside with tickets booked for Saturday for Grayson Perry exhibition at the British Museum with lunch at Savoir  Faire. Hope you're all enjoying your own festivities 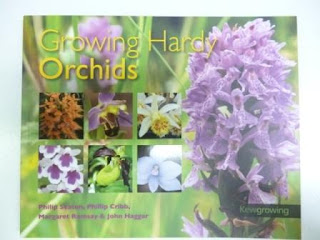 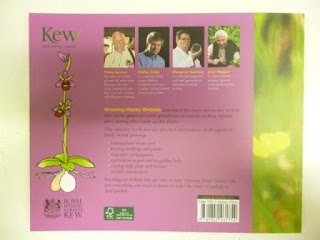 Today I picked up my 6 copies of 'Growing Hardy Orchids' . It's a nice-looking colourful book but I'm not the  best  judge of its qualities, given its chequered history. I started editing it over 6 years ago following the success of Growing Orchids from Seed but the challenge of  multiple authors  combined with a period of deep unhappiness at work  led to it being called 'blasted book ' in this household for the angst it caused me.
Handing over reponsibility for the book resulting in a major rejig of its contents means I no longer  have a sense of ownership but that's not a  bad thing- I've moved onto far more interesting and fulfilling roles in my job. I'm just glad to see it out at last, my orchid swansong. Now I can move on.
Posted by magsramsay at 18:09 2 comments: 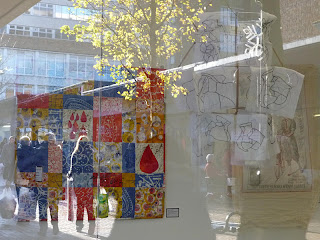 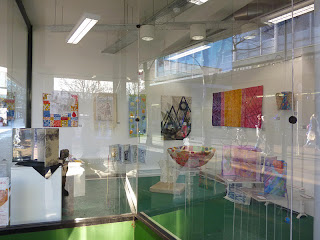 I spent Saturday stewarding the TVCT group exhibition 'Whatever Floats Your Boat' at Gallery@49  in Bracknell. Perishing cold - just as well Sandy had warned me  and I came armed with thermals and layers of fleeces.  It's a nice space if a bit tricky to take photos although I rather like how the art pieces interacted with the environment. 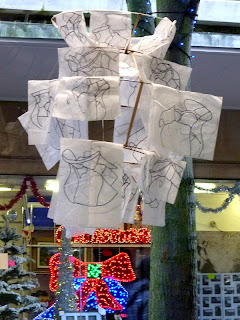 I spent most of my time stitching on my latest indigo piece ( usefully long enough to cover my legs!) and people watching out of the window, fascinated by what purchases people brought out of the emporium opposite. Black tinsel was popular, the display outside had to be replenished, quite tricky in the stiff breeze. 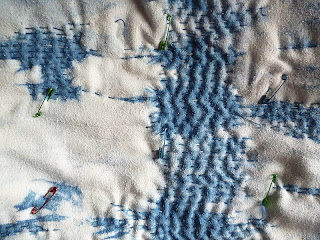 Some interesting conversations with Tonia who came down from her studio periodically to thaw out and with the few people who ventured into the Gallery. Several artists who popped in to admire the textiles talked about their own work, including a man who worked in leather. A couple of weeks ago Ian's mum had given me an old box of leather 'spirit stains' that had been her fathers so this was the opportunity to find out a bit more about them.   When I described them, he said that they were probably aniline dyes which you can't get anymore (for H&S reasons of course!) but apparently they're the best - transparent but intense. This led to futher discussions about tanning methods and whether he had a stash of leathers equivalent to my fabric. A little hesitantly he admitted this was the case!! 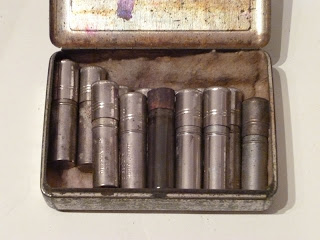 Posted by magsramsay at 13:59 No comments: 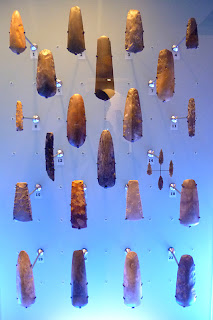 It's difficult to describe the  almost visceral pleasure of looking round the prehistoric galleries at the Museum of London which we visited before a performance of Belshazzars Feast at the Barbican. The concert itself was amazing - over 100 members of choir and  a large orchestra with 2 brass sections in the gallery behind  giving  full on surround sound.

What I love about all these flint and stone axes is that you can see the marks that made them (there was a video of flint knapping although I'm not sure they had beer towels in the Neolithic.... ) . A first glance they  look very similar then you see each one is individual - a bit like Judy's reverse applique dots which I'm itching to have a go at , I like the irregularity of Deb's version. 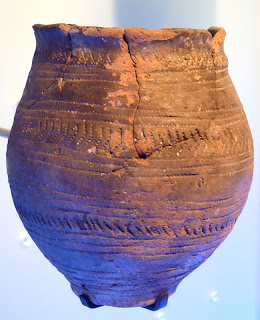 Many of the items, including this pot  were from the Thomas Layton Collection , collected  from in and around the Thames at Brentford - the local connection making these objects feel  personal. 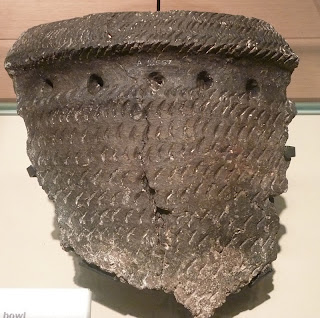 The archeologists can tell a lot about the maker by the marks - apparently this pot shard was decorated by a women with long fingernails! 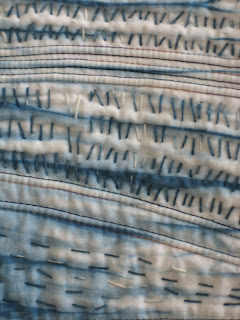 I wonder what these stitch marks say about me? ﻿
Posted by magsramsay at 10:40 1 comment:

There was an  impressive turn out for Lesley Millar's talk on  Tuesday at the Daiwa Anglo-Japanese Foundation - over 50 people including several of the artists, I felt very priviliged to be among them. 'Bite-Size' is an apt title for this exquisite exhibition, it struck me rather irreverently that it could be likened to a bento box of  sushi! So many items deceptively simple yet incredibly complex and thoughtful  in the choice and use of materials.Lesley showed slides for each maker which incorporated larger works from previous exhibitions as well as the current miniatures ,setting them in context of the partnerships that had evolved through the various projects.  I had about an hour to look round beforehand  but looked on objects with a informed  perspective after the talk  as the catalogue mainly  contained thoughts by the participants on these partnerships rather than descriptions of the pieces exhibited or artists statements.  A few days later, it is different pieces again that have stuck in my mind. 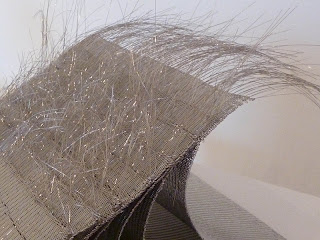 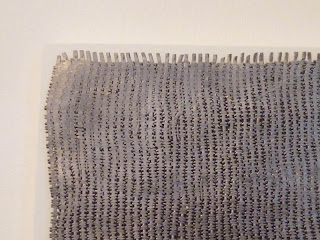 Sue Lawty 'Lead XV'
Many pieces pushed the boundaries of what might be considered textiles ﻿- 2 of my favourite pieces were  woven  from metal! Apart from the skills demonstrated and their subtle beauty, I like how they play with the idea of softness and comfort of cloth. 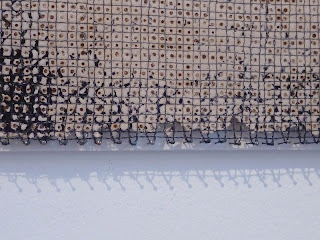 Diana Harrison 'Damaged (work in progress)'
Metal also featured in the form of pins in Diana Harrisons work.  I've admired her quilts since the early 1990's (or was it even earlier)  when I saw her work in an exhibition at the Crafts Council. She gave an absorbing talk at CQ AGM  about her work  a couple of years ago . What was so special about this piece was that it wasn't a scaled down quilt  but an intricate lace-like work in it's own right while still referencing her larger work. 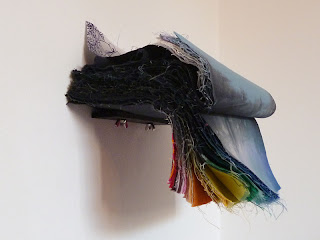 Masae Bamba 'Black Water'
I know textiles are tactile but why do some people always feel the need to handle work, look at the back , often thinking that 'do not touch' signs do not refer to them. Not ﻿that there were any such signs, it was probably thought that  the work would be respected. So I was rather shocked when someone started flicking through the layers of fabric of  'Black Water' treating it like a fabric sample book , not even returning the layers to their original position. I couldn't see a steward to alert - I didn't like to touch it myself. Lesley  herself referred to this incident in her talk asking  why couldn't people leave it alone and let it maintain it's mystery.
It had been restored after the talk so was able to appreciate it's powerful  depiction of a Tsunami wave ( many of the Japanese artists had been affected in some way) with the black swallowing  all the colour around it.  Knowing what it represented, it felt even more of a desecration.
It also made me think again of the challenges in making and displaying 3D work -  see Olga's posts for how  this exhibition has inspired her ( and for how 'Black Water' should look like). I wasn't happy about how my 'Taplow Vase' was displayed  in the Slough Museum show but I now see that part of the reason it was in that position was to prevent it being handled. The surroundings can make such a difference - I loved how the piece below was suspended in the window , interacting with the view behind . 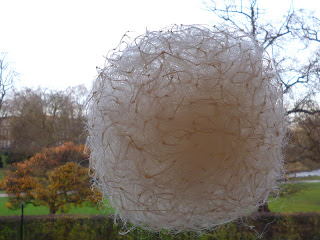 
After a couple of days digesting what I saw, I've realised how few stitched pieces there were. Many works ﻿were very skilled, elegant and precise but  for me rather clinical , lacking the obvious  imprint of the hand of the maker. One of the  exceptions was Celia Pym's 'Darned Sock' which  is the piece that has most stuck in my mind despite not taking a photo of it at the time, perhaps because I related to her recycling and giving new life to old textiles.
That choice probably says a lot about my taste  for earthy food rather than fine dining!
Posted by magsramsay at 13:24 2 comments: 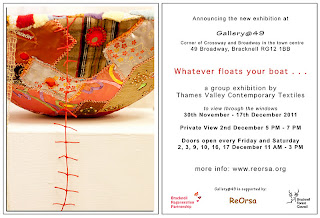 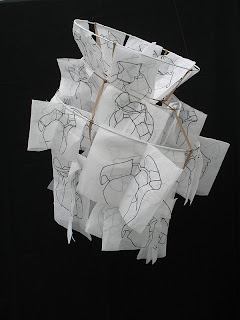 My 'Taplow Vase Reconstruction' made in response to a Roman vase in Slough Museum is having another outing - currently at Gallery @49 in Bracknell as part of 'Whatever Floats Your Boat' exhibition. Hope to get there on 17 December to sit and stitch and chat to anyone who might pop in.
On Thursday , went to a presentation to staff by David Nash about the  exhibition of his work next year at Kew Gardens.  The lecture theatre was packed and due to technical difficulties with slide projector (everyone uses Powerpoint these days) there was the opportunity to catch up with colleagues . Talk was mainly about how the strike had gone  but also found that the Hardy Orchid book I've been working on for 6 years will be published on 16 December!
He was such an engaging speaker, particularly recounting the construction of the Ash Dome and travels of the Wooden Boulder . Existing outdoor works will be situated throughout the gardens and these will be supplemented with new works created on-site at  a  'wood quarry'. There will indoor works in the temperate house, Shirley Sherwood Gallery and Nash Conservatory. It sounds fantastic!!

On a different scale , tomorrow afternoon I'm going to the gallery talk by Lesley Millar at Japan House on current textile exhibition 'Bite Size' which so many people have raved about. I'll be reporting back in my next blog post.
Posted by magsramsay at 08:18 1 comment: