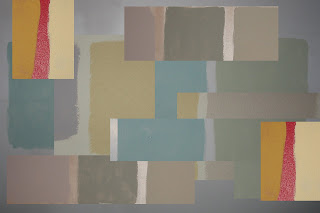 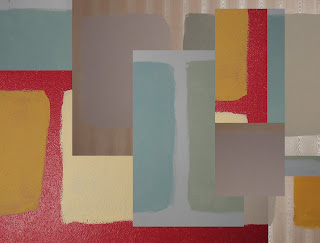 After last weekends' adventure to B&Q, have been testing out the 9 paint samples purchased for dining room, 'parlour' and Ian's office. The surfaces varied from textured wallcovering, stripey moire wallpaper to badly painted silk emulsion - its amazing how different the same colours look especially in varying lights. 'Pumice' looks promising as does 'mint cream' and we're waiting to decide on 'natural stucco' v. 'morning sun' but are both decided 'french mustard' is too firey for our taste.

Posted by magsramsay at 22:24 No comments: 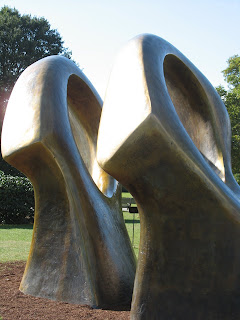 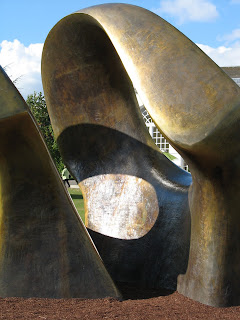 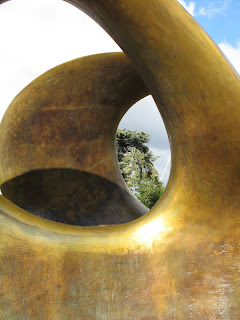 On my way back from lunch today I walked around the 'Double Oval' taking lots of photos. It changes character, shape and colour when viewed from different angles (the shadows were pretty amazing too). I can see this being the inspiration for several journal quilts - metallic gauzes with stitching and acrylics maybe? I shall track down the other sculptures and try a similar exercise.
I've volunteered to help out at the 'Big Draw' event at Kew on 13 October, hopefully getting a chance to play too!

Posted by magsramsay at 22:07 No comments: 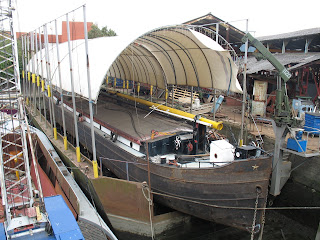 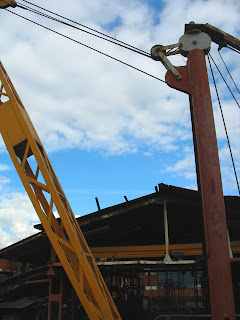 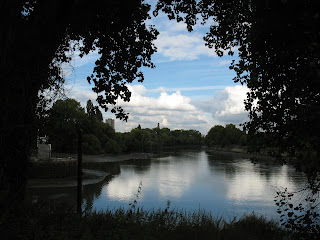 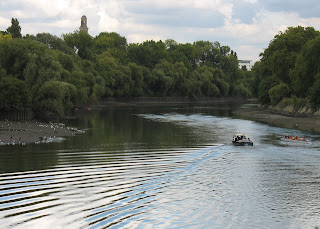 This weekend was the first visit of Ian's parents to view our new house. Besides admiring the space and light in the property we also explored the area along the canal. Ian had done a reccie in the morning while at the launderette and had discovered a road down to the Thames from the High Street .'Dock Road' leads past some locks and one of the few surviving boatyards down to where the Grand Union Canal meets the Thames. It's great that Brentford still retains some of its original history and function as waterside town despite all the development going on although I understand that the boatyard was under threat. As the area is tidal, its excellent for wildlife too - there were masses of birds on the mud flats.
The combination of brightly coloured industrial site, boats and tranquil waters is irresistible - I'll be back with my sketchbook! Ian felt rather proud of his discovery, knowing I'd like it, and rightly so.

Posted by magsramsay at 10:32 No comments: 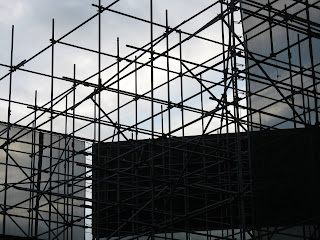 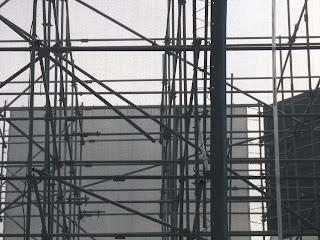 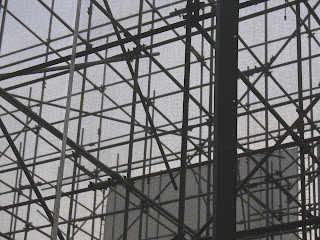 'Brentford is the new Docklands'.
There's a lot of building work going on in Brentford at the moment - the art deco buildings along the Great West Road - Wallis House and the old Baltic Centre ( at the end of our road) are being renovated as part of the GWQ development ( Great West Quarter)
On my way home yesterday I noticed the scaffolding , black netting screening and billboards and thought of the potential for Pojagi - different densities of black organza/ scrim with seams as the dense black lines.

Posted by magsramsay at 21:43 No comments: 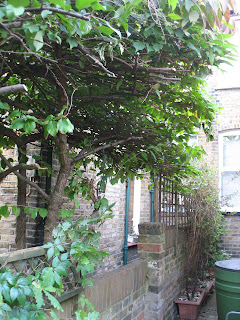 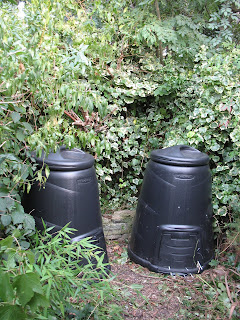 Compost bins in position having finished their job as parking cones
Last weekend, being forecast as the last of the decent summer weather, was spent in the garden. It's a nice size, packed with masses of interesting shrubs and plants but rather overgrown. The plan was to make a space down at the bottom of the garden to accommodate the 2 big compost bins we brought from the previous property and use them for their proper purpose ( although they did make very good bollards to reserve parking spaces when we moved)
Clearing a space involved quite a lot of bramble removal, lopping down branches of vigorous self-seeded trees and removing the grave marker for 'Sunbeam' (presume ex-cat - we'd previously found the grave of 'Merlin' in another flower bed). Ian had a fine time starting to fill one of the compost bins on scientific principles following instructions in the compost manual. Great one for manuals my husband - I'm more of the 'If all else fails read the instructions' school. The compost bins will be joined at some point by a 3rd which is currently overflowing near the house.
Meanwhile, to move the compost bins from where they were temporarily stored by the side of the house involved some serious hacking back of a tree and creepers which were starting to invade the guttering. Needs more shaping as it looks like an umbrella at the moment but it'll do. The borders are now filled with branches awaiting the arrival of Ian's new toy - a garden shredder.
Posted by magsramsay at 20:44 No comments: 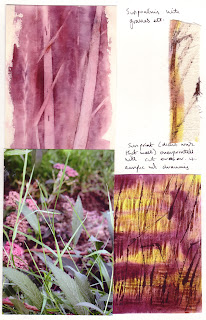 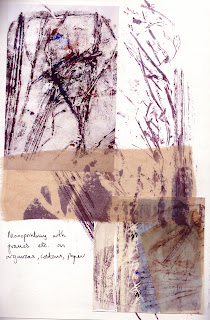 Page from 'Lab Book' -monoprinting
Wanting to have some creative time but with most of my stuff still buried away in boxes, I've been reviewing my sketchbooks. For many years I've had several on the go at any one time - the watercolour travel journal; the scribbles-at-exhibitions pad; the painting course detailed drawings notebook; the back-of-an- envelope style quilt sketches.
During the process of making my 'In the Spotlight' quilt I thought I ought to record the ideas, trials and 'toiles' along the way - keep a sketchbook 'properly' in other words (tho' I've never done City & Guilds). It's actually been a productive process and I've continued to use it to compile photos, sketches, samples and notes from workshops attended and other sources. Today I was updating the pages for the Cas Holmes workshop 'From the Land' I did in July (pictured above).
Rather than being a sketchbook , I've realised it's more like the Laboratory Books I keep at work. As scientific research may be published (or patented) it is important that records in Lab Books are sufficiently detailed and clear to allow "someone skilled in the art" to recreate the work - what was done, why it was done, what were the results. All details of a project should be recorded including raw data and final results of experiments, protocols and designs of experiments, details of equipment use, drawings, photographs, charts, computer printouts, etc. Record all research and developmental efforts, including ideas generated during meetings, noting sources of ideas.
Not so different from developing and recording art work.
Posted by magsramsay at 16:15 1 comment: 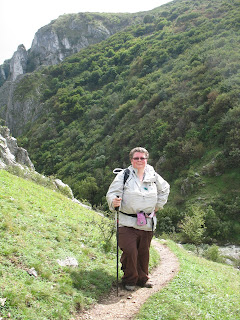 As a reward for 4 days indoors developing targets for the European Plant Conservation Strategy, we had a trip into the field to the Cheile Turzii Reserve near Turda about an hours drive from Cluj.
We had the option of either going through the gorge and back (popular with the bryologists) or a longer circular walk over the top of a limestone ridge and back through the gorge. I opted for the 'up and over' though after a very quick steep ascent through oak woods my calves were complaining not having walked for a while.
It was worth it to come to a wonderful species rich meadow and after a slippery climb through beech woods onto a plateau of short grassland with magnificant panoramic views.
After several days rain we were lucky with the weather, only starting to rain when we made our descent which on a grassy slope of barely stabilised scree was a bit tricky! The only reason I didn't fall was my third leg (trekking pole) though I used my bottom strategically in places.
Then back through the gorge on limestone boulders covered in algae - they did have metal cables in place to grab hold of where it was narrow.
A great sense of achievement - it took 4 1/2 hours without a break, and I was more than ready for my picnic and an 'Ursus' beer! Just as well I wore brown trousers - they got very muddy ( had to pack them separately for the flight home) 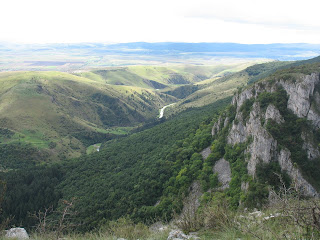 Spectacular views from the top of the gorge 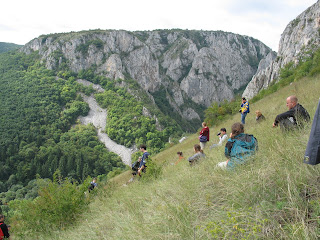 Botanists in the meadow area ( the slope really was that steep!) 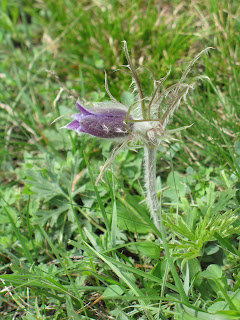 Pulsatilla (Pasque flower) in the short grassland on limestone 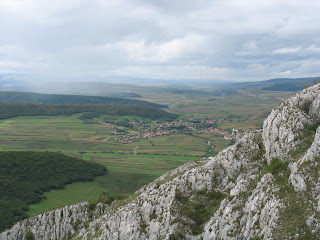 At the other end of the ridge looking down (the descent was long, steep and slippery) 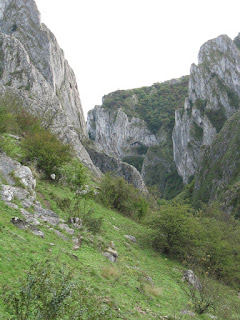 Near the entrance to the gorge

Posted by magsramsay at 16:36 No comments: 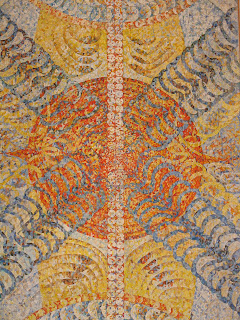 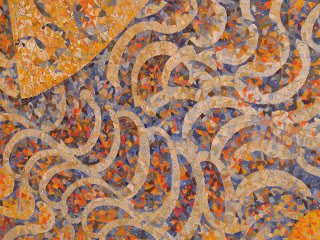 Just returned from a week in Romania in the city of Cluj-Napoca for 'Planta Europa' European Plant Conservation Conference. Bit of an old hand (this one making 4 out of 5) reporting on progress on the European Plant Conservation Strategy and formulating a new one incorporating considerations of climate change
The sessions were held at Babes- Boyai University in the Biology faculty. The main lecture room was surrounded by a series of murals which initially looked liked mosaics but on closer inspection turned out to be paintings made up of facets of colour, almost pointillist in style. They were both calming and intriguing, something inspiring to rest the eyes on when proceedings became intense.
Posted by magsramsay at 21:34 1 comment: 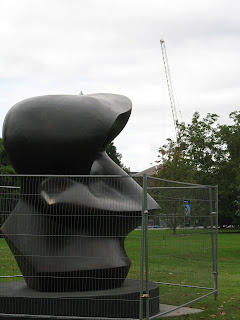 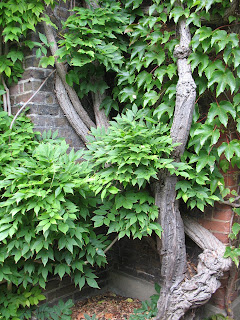 Sculptural Wisteria
I was in work yesterday (Saturday) to give a tour of the lab to Orpington Field Club. Walking to the Victoria Gate to meet them, I had the opportunity to see some of the Henry Moore sculptures that are being put into position for the exhibition opening 15 September. It has caused quite a bit of disruption with walkways closed and cranes lifting the bronzes over the gates when too large to enter by lorry but its already looking stunning. I'm assuming that the metal barriers will be removed - at the moment the scupltures look like dangerous animals behind bars at the zoo!
Seeing the sculptures set in the landscape gives a different perspective on objects see everyday. I was particularly struck by the Wisteria growing up the admin building when I went to collect some post.