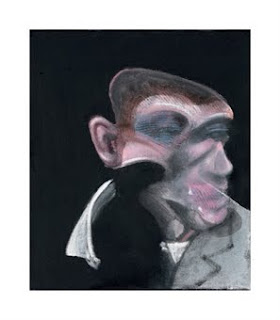 Olga's post on RA Summer Exhibition reminded me that I was going to write a bit more on the Hugh Lane Gallery in Dublin.
Part of the fascination of the reconstruction of Francis Bacon's studio was the painstaking and meticilous recording of all the artifacts.
Among the description of his art materials was his use of textiles:
Several pairs of thick corduroy trousers were found in the studio. Many of these were cut up into pieces, which Bacon used to pattern his paintings. The imprint of corduroy is evident in many of his paintings, including Study for Portrait of John Edwards, 1989. Imprints from corduroy are also evident on the door of the Reece Mews studio suggesting that Bacon applied paint to the door, printed the corduroy and then applied it to the canvas. Bacon also used cashmere sweaters ribbed socks and cotton flannels to similar effect. Three towelling dressing gowns were also found in the studio. It is possible that Bacon used these to print onto canvas also.
Posted by magsramsay at 13:45 1 comment: 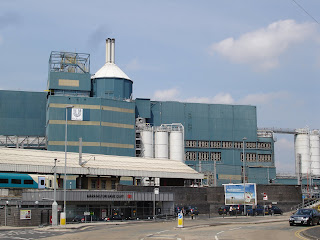 This weekend I returned to my roots for the first time in 15+ years - normally considered a mistake, this turned out to be an excellent idea. The prompt was the demolition of my old school - an 'end of an era' reunion was organised and the opportunity to show Ian where I was brought up. I had butterflies as we drew into Warrington Bank Quay ( used to be infamous for the smell of the soapworks - legend had it that if you left your car in the carpark and it rained you got a free carwash !) After a coffee in town caught the bus and butterflies vanished as I pointed out my primary school and church en route, eagerly looking out for landmarks and also for change. 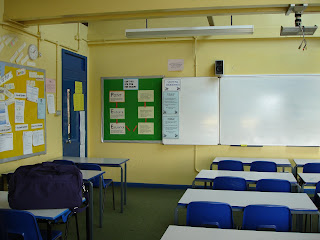 The school was absolutely heaving and a display had been put up with photos and memorabilia for each decade along with a presentation on the swish new building that has been built alongside. Met up with 3 old school friends I hadn't seen for years (although kept in contact via Xmas cards etc) We'd been in the same class since we were 11 although in different subject groups, even had the original register on display showing how we'd been divided into our forms ( over 200 pupils in my year among 8 tutor groups). The room pictured above in 'B' Block was one of our bases for registration - Bay City Rollers were at their peak (if you can call it that ) and I was thought deeply uncool as I wasn't a fan. 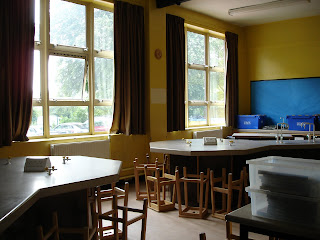 The science labs brought back most memories ( I guess as I did Chemistry and Biology to A level) we had lines of benches in our day rather than these 'islands'. I wonder whether lab design follows the same trends as kitchens? 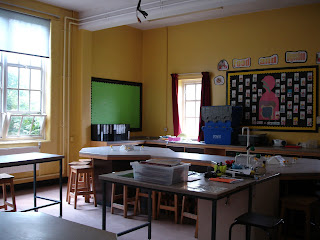 There used to be cages of locusts and a tank with toads at the back of the biology class ( where the green board is) . It was a shame that more teachers weren't at the event - we were discussing how influential our 'A' level biology tecaher had been. It's something I've been thinking about a lot in devising plant tissue culture experiments for schools - the importance of being exposed to interesting practical experiments. 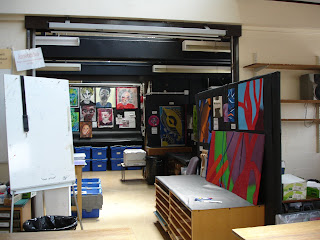 Everything looked rather run down as you'd expect when it's about to be pulled down but still evidence of vibrant teaching. I was envious of the light in the art studio - it had been rebuilt in the 80's after a fire, we'd had to manage without skylights.

After arranging to meet up at the evening event, I took Ian down the 'ginnel' from the school , walking my route home. I plucked up the courage and knocked on the door of my old house, our family home for 30 years. The owner was delightful and happy for us to look round. They'd made substantial improvements: my old bedroom had been knocked through to make a bathroom; a conservatory had been added;the garden replanted. It looked so different that there were no ghosts raised, pleased to see that the house had moved on and was loved.
The village has grown a great deal, with a lot of extra plush housing squeezed in and even some restaurants but still a sense of identity

A bus trip back to Warrington, a quick shower and meal at the hotel (Premier Inn) then back to school. Packed out again - they were up to the 900's on the tickets (mine was 15!) , my curly hair and glasses drew some old faces to our table! Most of the evening however was spent with Jackie and Helen telling Ian what we'd got up to as children and resolved not to let decades pass before we met up again.
Posted by magsramsay at 07:20 1 comment: 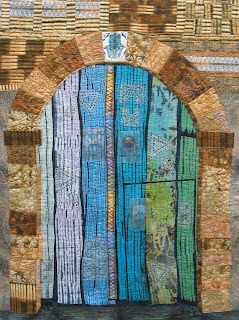 This weekend was spent quilting, binding and labelling my 'Tunisian Door' quilt for 'Under African Skies' exhibition at the Quilt Museum in York. Finally finished and posted off!! 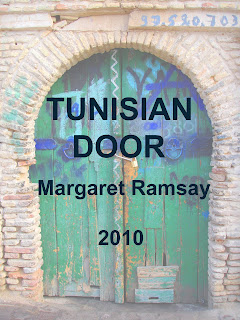 It's quite large (106 x 140 cm) and involves some quite hefty damask fabrics , including the backing and I was thinking as I wrestled it under the machine about somebody's comment about 'quilting must be so relaxing'. Challenging and rewarding, yes, but my aching arms don't think it's relaxing!! 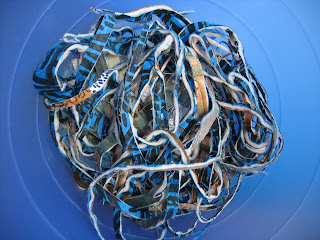 As the trimmings testify, it turned out to be rather recalcitrant when it came to measuring and cutting down to size. I used Ian's large dining table and thought I had it tamed only to spend another hour taking more and more slithers off to make the edges line up. Even then , once I'd put the facings on , I found it had wobbly edges that needed rectifying and spend another hour 'unsewing' . I'd forgotten what beasts improvised quilts can be compared to well behaved painted ones ( the acrylic stiffens the fabric which makes for firm edges) 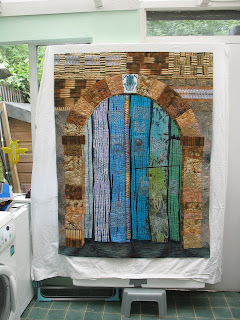 Time to cart my polystyrene design wall down to the conservatory for taking some photos. At least the weather gods were with me - bright but overcast.
Posted by magsramsay at 17:38 6 comments: 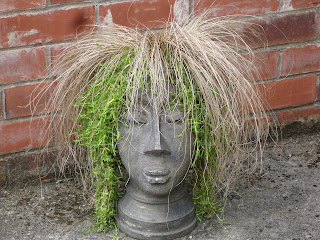 I know how she feels!!
I'm finally catching up with some sleep after very early flight to Dublin on Friday and very late return on Tuesday followed by more cauliflower cloning training.
I was collected from the airport in Dublin and taken to Malahide for 2nd breakfast (Hobbit style) having had my first at 5am! Great to catch up with Noeleen, Emer and Christine - thanks to contacts had a privileged peak in the private areas of the gardens at Malahide Castle with their amazing collection of Australasian plants - a lot that wouldn't survive in the UK 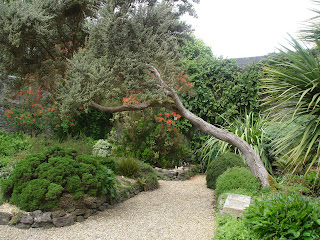 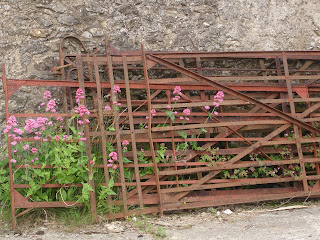 I couldn't resist these rusty fences! Then off to Kinsealy for a very useful look around the lab and finally to Glasnevin Botanic Gardens which was the venue for the conference. 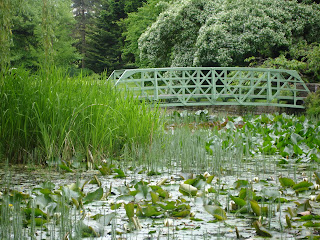 I had a bit of time to look around Dublin, visiting Hugh Lane Art Gallery - discovering artists new to me like Louis le Brocquy (more in another post) . Even though I'm not a big fan of Francis Bacon's work, the reconstruction of his studio and the description and records of the painstaking work involved was absolutely fascinating as were the insights into his working methods. 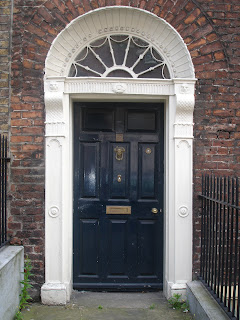 After lunch in the deli at Avoca I made my way to the National Museum of Archeology, snapping doors as I went( although they're not crumbly enough for my taste!). So many items had been preserved in bogs (including textiles) - the prehistoric gold, found in hoards was jaw-dropping, a similar experience to seeing the masks from Mycenae. Photos were, understandably, not allowed but I didn't think they'd mind me taking a picture of the stairs. 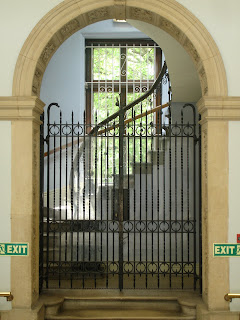 After a brief visit to the Irish Museum of Modern Art ( spending some time with a lovely couple of Rothkos, part of an exhibition linked to composer Morton Feldman) , it was time to switch to botanical congress mode. 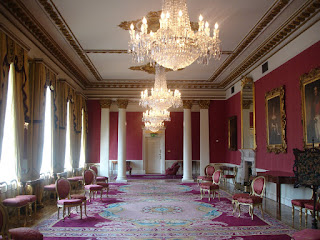 The conference was opened by the Taoiseach (equivalent of prime minister) and we had a reception in the Castle state apartments( I would have been a bit worried about red wine on the beautiful carpets! ) 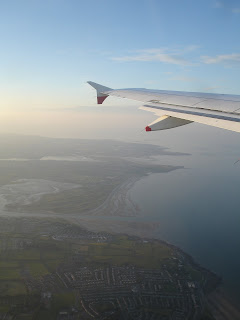 I'd had to change my flight as the session I was speaking in was moved. Just time to give my presentation and head home.
PS - Best meal I had was at the Mermaid Cafe with free entertainment observing what was going on at the stage door of Olympia Theatre nearby.
Posted by magsramsay at 12:40 1 comment:

Off to Dublin , Back Soon 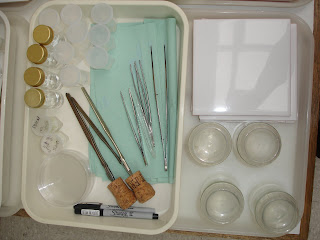 Totally knackered after 9 sessions over 3 days teaching science technicians cauliflower cloning - at the end of the day I'd have to ask Katie (sandwich student helping me) whether I'd already said something! Luckily they were (mostly) hugely enthusiastic which makes it worthwhile.
Finishing my packing - taxi coming at 4am for trip to Dublin for 4th Global Botanic Gardens Congress . Back late Tuesday - behave yourselves!!
Posted by magsramsay at 21:04 1 comment:

On day 2 of the Paper lamination course, the first thing I did (apart from an excellent coffee at 'Coasters' )was heat set and then soak the piece I'd set up the day before with inkjet papers of doors and good quality polyester sheer. It worked! I actually quite like where I hadn't applied enough Matt medium at the bottom and it tapers off. 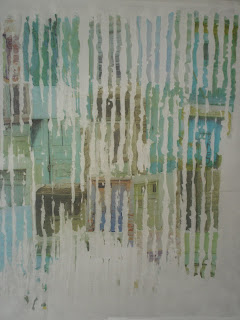 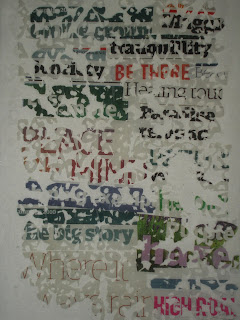 Encouraged by this, I did 2 more samples - using newsprint headlines and polyester sheer (above) and lazer printed b&w prints of door with a golden silk and metallic (below) I used the same screen for both of 'seeds' . Pleased with the results. 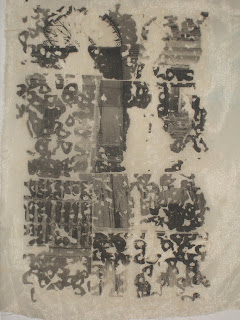 As my final experiment I used inkjet prints of doors (many heightened using Photoshop) with silk organza - pictured below drying on the line after printed with matt medium using 'wiggly line' Thermofax screen. 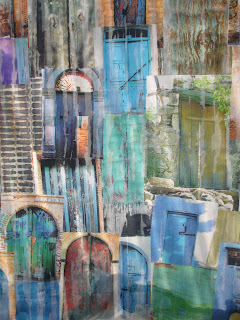 Although a lot of the ink washed out ( and delicately stained the organza), I'm thrilled with the results - lots of potential here. Found the screen used was very important as it dictates how much medium is transferred and therefore the proportion of the images kept. Can't be too precious about pictures used as most of it disappears anyway! Unlike screenprinting where I can't face cleaning screens in our miniscule kitchen sink, this technique would work very well at home as using smaller screens and relatively clean matt medium. Sarah Welsby was an excellent teacher and it was worth the class fee just for the tip on using table protector as a printing mat. 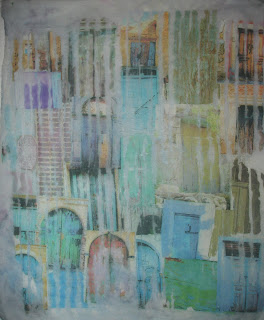 Shan't do anything with it for a while though. Spent Sunday quilting brickwork and I'm now entering a busy period at work training technicians and going to a conference in Dublin .
Thanks for all the very helpful comments about exhibiting opportunity. I decided not to exhibit at the moment but will review this later in the year. As the gallery is a brand new one, I'll go and visit it when it does open and see if my work would fit in with the work on display (as it would be part of a general exhibition) The owner is happy to meet me later when the pressure is off a bit to discuss. 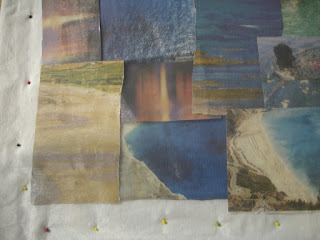 At the end of day 1 of lamination course at Art Van Go with Sarah Welsby ( which was a joint birthday present from Ian and his parents).
Recipe for an excellent Day:
First arrange Guardian Travel Section newspaper photos and pin layer of organza over top 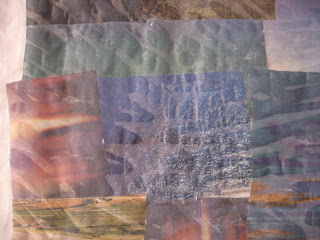 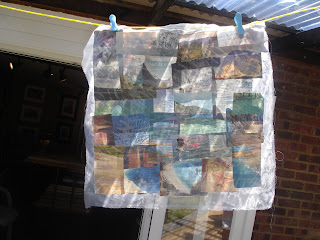 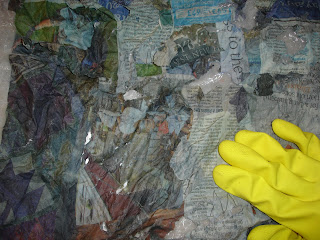 Iron to fix, soak in water and scrape off newspaper from back
Sour note(there's always one , like wasps at a picnic) - discover 'bargain ' organza wasn't - rips appear and image comes away from fabric. 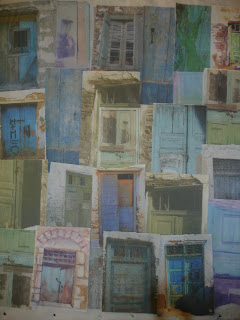 Leave for distressing/playing with tomorrow and and make fresh sample with door pictures and organza purchased from tutor.
Marinade overnight and return home to dinner in garden followed by Metaxa
Posted by magsramsay at 18:20 1 comment: