Initially when I read the brief for April's Take it Further Challenge, I thought I would go with the concept which was of 'change'. However I've decided to go with the colour palette ( which is almost the same as my Medieval Tile Quilt), concentrating on the central gold colour.

In 2 weeks time we'll in Greece in Paralio Astros ( 5th time , alas without Al as rep this time- I never thought I'd be one of those people who keep going back to the same place ) We thought we'd like to take part in the 'World Beach Project' co-ordinated by Sue Lawty so I was looking through photos from Paralio Astros to get a head start. I love the colour in the stones and the strips of seaweed (there had been a stormy few days) 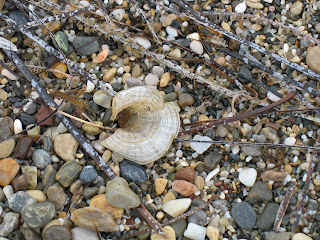 I printed off part of the image on bubblejet set treated poplin and then returned to the idea of transparency layers using silk organzas. I'd tried putting strip inserts in but wasn't very happy with the results , particularly the frayed uneven edges (normally I use French seams for organza). However after a long lunch on Saturday with Sue who liked the raw edges and suggested I make a feature of them, I inserted a few more and also some pieces of shibori from class at Festival of Quilts last year. I've just got a new toy (early Birthday present) of a Read 16 needle smocking pleater and I've been feeding it with bits of organza- I love the rippled effect. 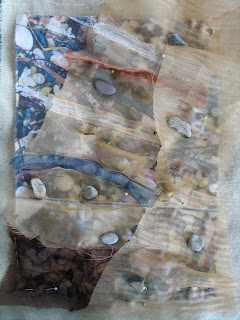 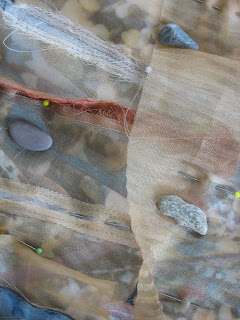 When I was sorting through the travel wallet, I came across my diagram drawn last year to explain to the owner of Irini Filoxenia that we had ants in our apartment. In the end I didn't have to use it or resort to chemical warfare as the boiling water was sufficient to deter them. I thought it would save the pantomine we had the first time we stayed there when Ian's brown socks fell into the garden from the washing line not once but twice! At least she remembers us with a grin! 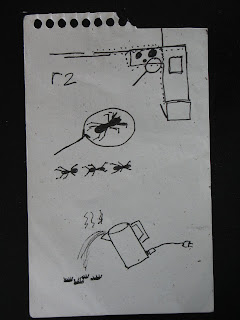 i like what is happening with the image shadowing through the sheer fabric. and the ragged edge doesn't bother me either. this sheer concept has me mesmerized but i am too short on time now to take it further. i'll watch you for a while.....

I am loving the way you developed your idea here (and previous TIFC pieces) and pushed it even further... The beach is a very evocative environment for me, but I think most of the things I can see at my feet, up close, which you have incorporated so beautifully.